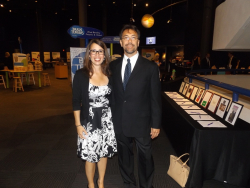 Two people who have been blind since childhood are having their vision restored with a gene therapy developed by University of Florida Health scientists and their collaborators, early-stage clinical trial results and recently published findings show.

Patients who have a form of Leber congenital amaurosis, known as LCA1, are typically blind or have severe visual impairment from birth. The UF Health team and their colleagues have spent decades developing and testing a gene therapy for the inherited genetic disorder. The treatment uses a harmless virus to deliver a functional copy of the gene to the eyes.

To treat LCA1, a gene known as GUCY2D­­ is inserted into the retina. Just days after being treated, both adult patients in the study showed significant increases in their highly light-sensitive photoreceptor cells — essentially restoring their night vision after many decades. The findings were published recently in the journal iScience.

While LCA is considered a rare disease overall, it is the most common cause of inherited blindness in children and affects about 3 in every 100,000 babies.

About one-quarter of LCA cases are caused by mutations in the GUCY2D gene, which interferes with photoreceptor cells’ ability to convert light to neuronal signals. While LCA1 profoundly affects vision, it has one helpful characteristic: The disorder leaves photoreceptor cells, known as rods and cones, largely untouched. Despite these cells being profoundly dysfunctional, their structure remains intact. That gives scientists an opening to improve patients’ vision with a targeted gene therapy.

The patients, a 32-year-old woman and 19-year-old man, had limited daylight vision but were essentially blind at night due to light sensitivity that was 10,000 to 100,000 times below normal before the treatment. Both patients were treated only in one eye in order to best study the gene therapy’s effectiveness.

Eight days after treatment, the patients’ light sensitivity increased substantially, the researchers found. After three months, rod-mediated light sensitivity in the female patient was close to the lower end of normal. The treatments were administered in Philadelphia-area hospitals in conjunction with University of Pennsylvania researchers, who are longtime collaborators on the project.

The published findings come shortly after separate clinical trial results showed the gene therapy delivered clinically meaningful vision improvements and was well-tolerated at its highest dose. The 15 patients, including three children, who received the highest dose had a “significantly larger” change in retinal sensitivity and showed indications of a larger mean change in visual acuity compared with untreated eyes. The data were presented in October at the American Academy of Ophthalmology annual meeting. The clinical trial is being sponsored by Atsena Therapeutics, a Durham, North Carolina gene therapy company. The Boyes are founders and executives of the company.

The trial results show that the gene therapy is well tolerated (no safety concerns) and that treated patients’ exhibit significant improvements in retinal sensitivity and vision, Shannon Boye said. Next, the researchers hope to move the therapy into a key trial before seeking federal regulators’ approval for public use.

“It has been extremely rewarding to watch this program progress from its infancy as my Ph.D. thesis project all the way into a clinical trial that is positively impacting these patients’ lives. This path was paved by the institutional support UF provided me over the years, my amazing gene therapy collaborators and UF’s Office of Technology and Licensing,” she said.

What Is Magnesium Good For?